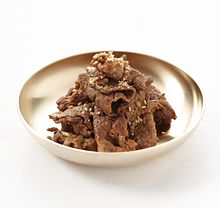 Charye (차례)
Ancestor memorial services at home, symbolizing the returning of favors and honoring ancestors and past generations.
The rite involves the gathering of families in holding a memorial service for their ancestors through the harvesting, preparation, and presentation of special foods as offerings. The rite embodies the traditional view of spiritual life beyond physical death, respecting the spirits of the afterlife that now also serve to protect their descendants.
Cheonggukjang (청국장)
1. The thicker version of Doenjang containing whole and ground soybeans. It is made by fermenting boiled soybeans. Air dried with rice straws at 40°C, for 2 to 3 days. Non-traditional preparations add salt and red chili powder.
Cheonggukjang jjigae (청국장찌개)
Stew made of Cheonggukjang with potatoes, onions, and tofu. Historically it was used as rations to Qing Dynasty soldiers.
Chuseok (추석)
literal meaning "Autumn eve"
also know as hangawi(한가위) to mean "the great middle (of autumn)")
is a major harvest festival and a three-day holiday in both North and South Korea celebrated on the 15th day of the 8th month of the lunar calendar on the full moon.
daegu-tang (대구탕)
Codfish soup
Dang Jo Cheongyang (청양고추)
More spicier Korean chili pepper. It is also called Cheongyang chili pepper
It is a specialty of Cheongyang County of South Korea. It was a hybrid of Jejudo and Thai chili. It is green or purple unriped and deep red when ripen.

Doenjang (된장)
1. Fermented soybean paste made entirely of soybean and brine
2. stone-ground dried soybeans are boiled and formed into blocks called meju. This are dried and wrapped with dried rice stalks. Fermentation for three months with Bacillus subtilis bacteria and water, that consumes the soybean protein. Extended period of fermentation on traditional clay pot enhances the separation of the liquid part, used a soy sauce. The solid part of the mix is the Doenjang.
Dubu jjigae (두부 찌개)
Korean stew made with firm tofu. 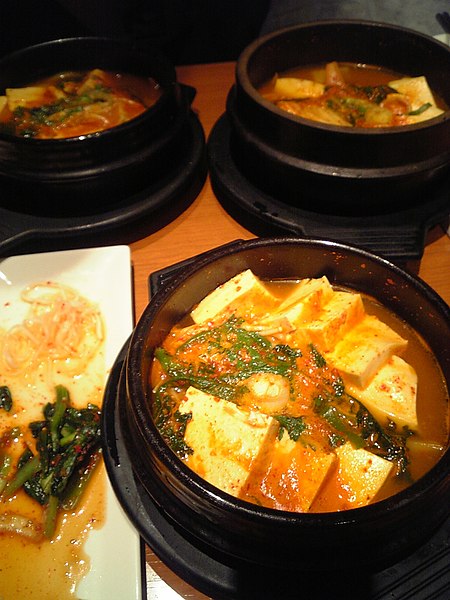 Ggeutjang (끝장)
The end or death of something.
Gim (김)
generic term for a group of edible seaweeds used in Korean cuisine, consisting of various species in the genera Pyropia and Porphyra, including P. tenera, P. yezoensis, P. suborbiculata, P. pseudolinearis, P. dentata, and P. seriata.

Gimbap (김밥)
is a Korean dish made from cooked rice and other ingredients that are rolled in gim—dried sheets of seaweed—and served in bite-sized slices.

Go-myeong (고명)
Synonymous to wang-myeong
Gochu (고추)
Korean for chili pepper.
Gochujang (고추장)
Original: gochu-jang
It is basically a fermented chili paste that is seemingly hot and sweet.
It is made from chili powder, glutinous rice, meju powder, yeotgireum (barley malt powder), and salt.
The sweetness comes from the starch of cooked glutinous rice, cultured with saccharifying enzymes during the fermentation process.
Traditionally, it has been naturally fermented over years in jangdok (earthenware) on an elevated stone platform, called jangdokdae, in the backyard.
Gochujang is the longer version of Doenjang, with fermentation in the big earthen pots taking as long as three years. Red chilies, glutinous rice, soybeans and salt are the added ingredients. 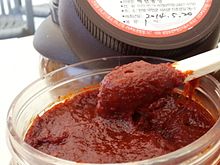 Gogi (고기 ())
means meat in general.
Gogi-gui (구이)
Grilled or roasted meat cooked in Korean style.
Marinated and non-marinated meat dishes.
Gui (구이)
Grilled or roasted dish cooked in Korean style.
Guk (국)
It is a type of soup basic to Korean meal. It is more watery than tang. In table settings guk is place on the right side of bap and left side of sujeo. The names of lighter soups with vegetables are suffixed with -guk.

Jang (장)
1. soy-based fermented sauces
2. mart
3. intestine
4. crab spawn
Jangdok (장독)
means crock for codiments and soy sauce.
Jangdokdae (장독대)
jangdok + dae (means place or support)
Place of grounds for storing jangdok in open sun.
Jeong (정)
1. Love, affection, compassion, sympathy, community, attachment
Jjigae (찌개)
1. Korean stew. Commonly a communal dish served in boiling hot pot.
Jjang (짱)
1. Best
2. Edible paste
Jogae-tang (조개탕)
Clam soup
Kalbi (갈비)
synonymous to galbi
Majimak (마지막)
Last or final of something.
Makjang (막장)
1. A soybean and red pepper paste that can added to Korean meat wrap, stew, or soup.
2. Can also refer to the closed end of a mine or the mining work itself.
3. Korean dramas. It combine the words ggeutjang (끝장) and majimak (마지막). However, this two words essentially means the same in english language. In dramas, the story are made ridiculously nonsensical to hook the audience.
4. A common Korean phrase 갈때까지 간다 which means "Go till you go" (Google) or "I'm going until I go" (Microsoft) Translator Apps. Contextually it means go through to the end of one's goal no matter what difficulties comes on the way.
There are several interpretations to this unofficial word, but the common concept is putting extremes of situation or things describing the element where it is used.
Meju (메주)
a brick of dried fermented soybeans. 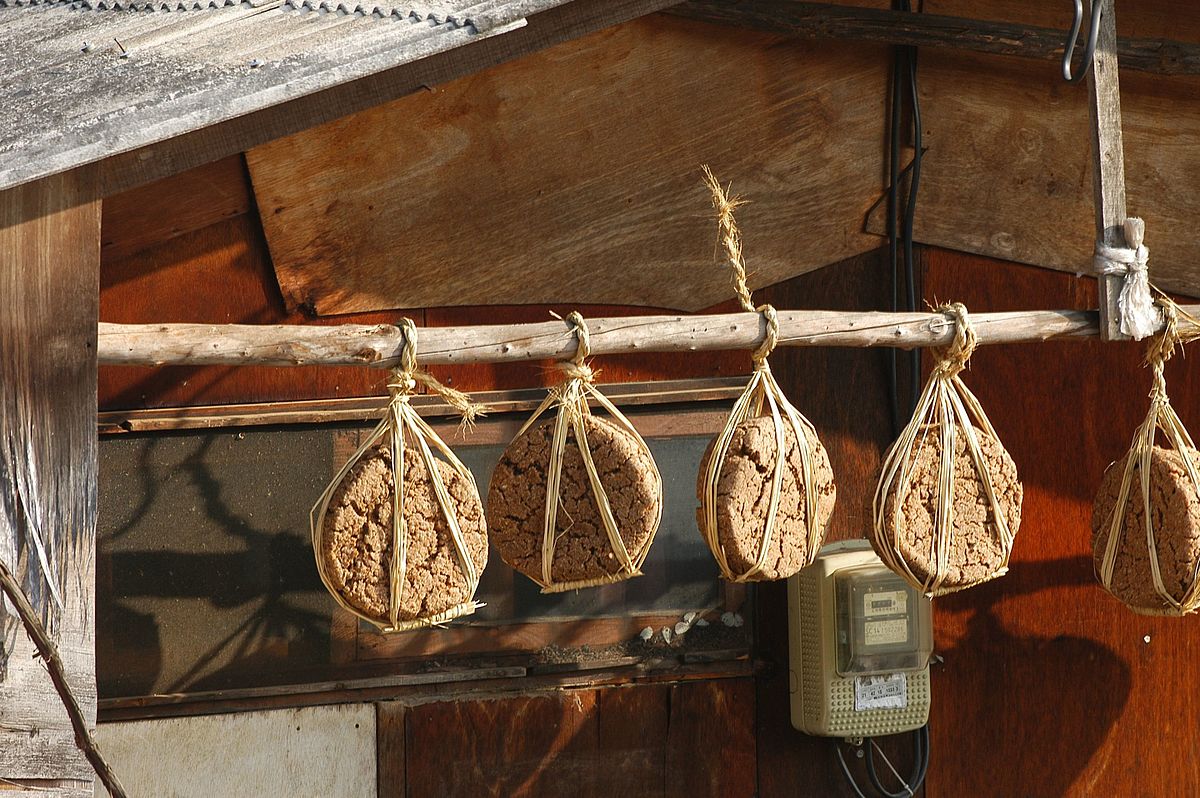 Sageuk (사극)
historical dramas
Ssamjang (쌈장)
Is salty, spicy, mildly sweet, nutty, umami pungent flavored, thick paste of fermented soybeans. It is made of doenjang, gochujang, sesame oil, onion, garlic. Doenjang and gochujang are the core ingredients, to which various additional ingredients may be added to alter its flavor. These are
brown sugar, ground beef, dried shrimp, and anchovies.
It is used to spice up short ribs and sliced brisket or dipping sauce for meat with rice roled into lettuce wrap.
Sempio
1. South Korea’s oldest and most renowned commercial brand of soy sauce. It uses soybeans, salt, and pure water.
2. Spring (spring water).
Seongmyo ()
Family visit to the ancestral graves.
Songpyeon (송편)
Half-moon rice cakes. Its is a Korean traditional rice cake stuffed with ingredients such as sesame seeds, black beans, mung beans, cinnamon, pine nut, walnut, chestnut, jujube, and honey.
When making songpyeon, during the steaming process the rice cakes are layered with pine needles. The word "song" in songpyeon means pine tree in Korean. The pine needles form a pattern on the skin of songpyeon, and so contribute not only to their aroma and flavor but also to their beauty.

Songpyeon is also significant because of the meaning contained in its shape. The round rice skin itself resembles the shape of a full moon, but once it is wrapped around the filling its shape resembles a half-moon. According to a Korean legend from the Three Kingdoms era, these two shapes ruled the destinies of the two greatest rival kingdoms, Baekje and Silla. During the era of King Uija of Baekje, an encrypted phrase, "Baekje is full-moon and Silla is half moon" was found on the back of a turtle and it predicted the fall of the Baekje and the rise of the Silla. The prophecy came true when Silla defeated Baekje. Ever since, Koreans have believed a half-moon shape is an indicator of a bright future or victory.
Therefore, during Chuseok', families gather together and eat half-moon-shaped songpyeon under the full moon, wishing for a brighter future.
Sujeo (수저)
Spoon and chopstick set placed on right most side of table setting.
Sunchang (순창군)
Name of county in North Jeolla Province of South Korea.
Taeyang (태양)
means "sun"
Taeyangcho (태양초)
means "sundried red peppers"
Tang (탕)
a class of less watery Korean soup, grouped with more watery guk class of soups. Tang is sometimes used in place of guk to invoke honorific connotation. The names of thicker soups with more solid ingredients are suffixed with -tang.
Tteok (떡)
is a class of Korean rice cakes made with steamed flour made of various grains, including glutinous or non-glutinous rice.
Ttheok could also be written as ttukk, ddukk, dhukk, or ddeok. 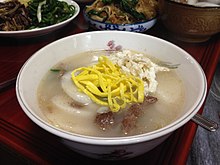 Tteokbokki (떡볶이)
means "stir fried rice cake" It is made from garae-tteok sliced into small sizes. It is seasoned with spices of chili paste or soy sauce.